A Day in the Life…Offshore VFR Captain! 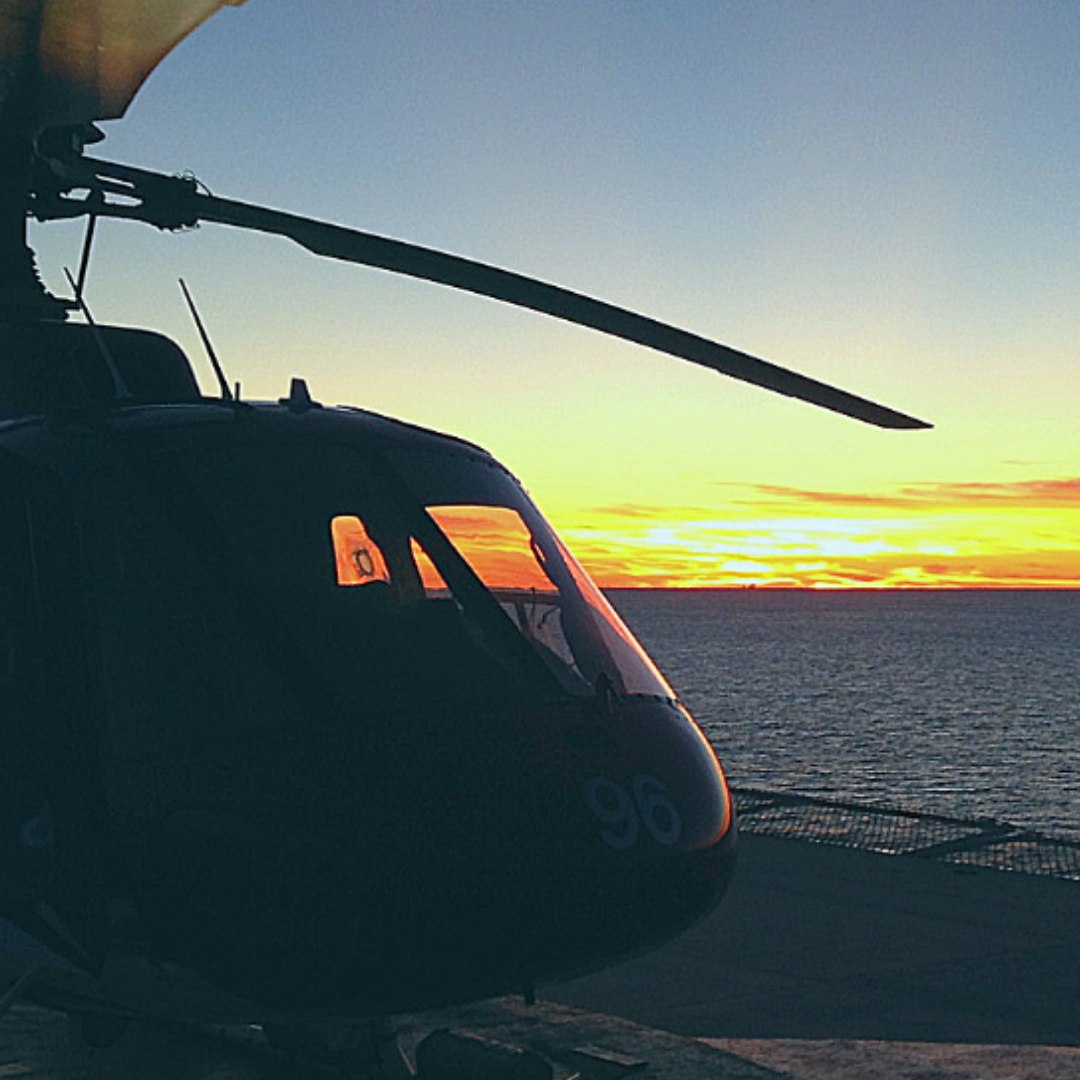 The fourth installment in our “Day in the Life” series is provided by current EMS pilot and former Offshore pilot, Brad Dean. Brad details the experiences of a “field pilot” flying offshore in the Gulf of Mexico (GOM), for the Oil and Gas industry. Not only that, but he describes what a career progression can look like and will be invaluable for pilots considering a position as a Pilot in the Gulf of Mexico

Before I ever took a job in the Gulf of Mexico, I tried to find out as much as I could about what the job was all about and most of the forums said the same thing… “there’s no typical day in the Gulf”. However, since leaving the Gulf, I’ve met a lot of pilots that pretty much all seem to have had the same experience as I did. So while there may be no “typical day” there does seem to be a “typical experience” and mine is from the point of view of a VFR captain.

Most of the pilots don’t live in the same region as the helicopter companies that service the Gulf of Mexico. We commute, and from all over the country; even a few internationally. There are two choices, drive or fly. Those that fly usually have some sort of vehicle they leave either at the airport that they fly into, or have arrangements to leave it at the hotel that they stay in on the last night of their hitch. I have friends that stayed at the same hotel for years on their last night. The pilots pretty much took over the hotel bar every other Wednesday night after getting off hitch, then fly to wherever they live the next morning. Then two weeks later, fly back to work.

I lived close enough to drive. Depending upon which company base I worked at, dictated my drive time and route. I live in the panhandle of Florida; the longest drive to work for me was to Cameron, LA (9 hrs) and the shortest was to Houma, LA (5 hrs). I liked driving because I could travel on my schedule and take as much stuff as I wanted to with me. I always liked to get into town early and get settled into the company trailer, apartment, or house early. Because come the next morning, it is get up early time for the next 14 days.

I learned to fly almost 10 years before actually flying for a living. I learned on my own, while still active duty in the Navy. Flying is a second career and I was fortunate enough to have had just enough flight hours and experience to be able to get a job offshore right after I retired from the Navy. How I built time and got experience is a whole story in itself, so I’ll stick to the GOM for now.

I went to work for RLC, back then known as Rotorcraft Leasing, flying a Bell 206 B3 out of the Galliano, LA base. At first, I lived in a trailer with a few other pilots, but soon got moved into a house with one other pilot. In both, we had a common bathroom, but our own room and sink, and of course a kitchen and living room with Dish TV! The training at RLC was outstanding. It’s the first exposure to turbine aircraft for a lot of new guys, so it incorporated the Part 135 training, turbine training, and prepared you to go offshore. The training lasted about two weeks, about 20 hours of flying including doing autorotations to the water in a 206 with fixed floats. Of course, weight and balance is important, but you learn that one of the MOST important things is…to know where fuel is! What you don’t carry in people/cargo, you’ll carry in fuel. Unless I was solo, I rarely took off at less than max gross weight.

The contract I flew required that I stay offshore on one of the platforms. I would stay offshore for 3 nights and on the 4th afternoon return to base for maintenance. I flew what they called the “Loop Bird”. For the most part, I flew one or two operators to different platforms every day so they could perform maintenance, etc. The guys I flew were responsible for 17 unmanned oil/gas production platforms that flowed into larger production facilities. Sometimes I would stay with the operators and sometimes I would just drop them and go move other people around the field or make a run to the “beach” to pick up parts or people.

Crew change day is a whole different story. That’s the day that everybody offshore comes in, and everybody on the beach goes out. And that’s when the customer (the oil company that actually hired RLC to fly for them) can really bring the pressure to fly in bad weather. I heard lots of stories of how “they used to do it” and they tried more than a few times to pressure me to fly in weather that was less than company minimums. Most helicopter operators require 500’ ceiling and 3 miles visibility. It’s not the wild west it used to be, the companies have much more operational control than they used to; which takes a lot of pressure off of the pilots.

Weather in the Gulf

If the weather never got bad, this would be one easy job. But, that isn’t how it works. The weather in the GOM can go from great to bad, to really bad, really quickly. Of course, it’s hot in the summer; not only does that affect the helicopter’s performance, but it also creates thunderstorms, waterspouts, and hurricanes. I did one hurricane evacuation in my first year in the gulf. Thunderstorms are easy, steer clear, let your dispatch know you deviated for WX and go around if you can. Sometimes you can’t, you wait it out tied down on top of an unmanned platform, or you drop in on a platform that may not even belong to the company you’re flying for, but you’re tied down and safe. I was never unwelcomed when that happened; they’ll usually point you to the phone, coffee pot, bathroom, and TV room to wait it out. Oh, always carry a bag with a couple of days clothes and a toothbrush! The summer also brings haze. There are windless days that the slick water surface reflects the haze and creates flat light conditions almost to the point of being IFR, so you learn to keep platforms in sight and use instruments well.

The winter is an entirely different animal. High winds or crappy visibility, pick one, or sometimes both at the same time. Then there’s the fog. The most I ever sat without flying was 7 days, due to fog. At least I was on the beach and not stuck on a platform offshore. The sea fog can imbed itself in the already crappy visibility and make VFR flying sketchy at best. The best thing to do is wait it out. Unfortunately there are only so many places to land offshore and some are few and far between. Getting into low visibility situations was by far the scariest thing I ever encountered. Hydraulic failures, chip lights, etc. didn’t come close in pucker factor. Fortunately, the weather reporting offshore has improved dramatically.

I spent a total of 13 months at RLC, flew all versions of the Bell 206 and accumulated just over 1000 flight hours in that time. I, of course, learned a ton and enjoyed working there; I still keep in touch with some of the pilots and passengers I flew.

I did about a two and half year stint flying EMS and then went back to the Gulf; and went to work for Era Helicopters, flying the Astar. At first, I wasn’t really keen on the Astar, but I soon found out how capable an aircraft it really is.

The first contract I flew was for an oil and gas operator that is notorious for flying all day, every day. Again, I stayed offshore and brought the helicopter back every 4th night for maintenance. Just like before I stayed on a platform with only 5-6 guys on it fulltime, and I had my own room. They treated me great and always had dinner waiting on me when we flew late in the summer’s long days. And the food is GREAT! Plus all the ice cream you can stand!

There were 45 platforms in the field that myself and 4 other VFR helicopters serviced, as well as one IFR S-76 on that contract. It wasn’t unusual for me to make 60 plus landings in a day and fly up to and touching 8 hours of flight time. The days went by fast for sure.

After that contract ran its course I took a check-ride with the OAS (Office of Aviation Services) in order to fly BSEE personnel (Bureau of Safety and Environment Enforcement) the government inspectors that keep tabs on everything going on offshore. At first, I really didn’t want to do it, but soon figured out that this was the best-kept secret in the Gulf of Mexico!

Unlike the oilfield workers, the government employees are only allowed to work so many hours per day. So, they don’t leave at the crack of dawn and they don’t stay out late. A standard day with them was to pick them up at the Lafayette FBO, take them to whatever drill rig, ship or platform they needed to go to that day and watch TV and eat lunch while they did their inspections, then fly back to the beach. They also relied on your judgment for the weather, they didn’t push weather. They would rather not go than to get stuck offshore overnight.

Most of the BSEE pilots work a 5/2 schedule and get paid accordingly for working more days. I was the token 14/14 pilot at our base and did any flying or maintenance run-ups, etc. on the weekends; which was rare.

That was a great gig, I flew that contract for 2 ½ years until I was selected to transition into the Sikorsky S-92. I made a lot of friends at Era and truly enjoyed working there. Not only is flying in the gulf a great job for a newer pilot, but it can also turn into a great career. The pay is good, the rotations are good, and if you stick it out transitions into bigger aircraft are usually in the cards.

Brad Dean is an ATP Rated Helicopter Pilot with 4500 hours of flight time and is currently working for Columbia Helicopters in Afghanistan on DOD contract. Brad also flies an MD-500 and OH-6 for the USDA Wildlife Services.

He’s a retired United States Navy Diver and has been flying for 19 years total and professionally since 2010.