Growing up in Cork Ireland, in a farming and aviation family, I always enjoyed being in the outdoors and operating any piece of equipment I could get the keys to. After gaining my Helicopter license at 18, I focused my attention on getting into the Utility sector of the Helicopter industry in the US. Little did I know I soon would be flying the Ferrari of the skies, the MD500D, in a highly sought after niche of the utility sector of the helicopter industry.

An Aerial Saw pilot is a year-round position in that there is no busy or slow season. The 500D models we fly are like migratory birds chasing fine weather up and down the Atlantic and Mississippi flyways. The 500 is the aircraft of choice due to its controllability, agility, and power to weight ratio. In the summer you can find me as far north as the Green Mountains of Vermont or around the lakes of Minnesota. As the temperatures drop we will work our way South completing projects as we go through the hollers of Kentucky, West Virginia, and Arkansas racing Mother Nature till we find our winter home in the swamps of Louisiana or amongst the pine trees of South Georgia. What do you call yourself? Is a most common question I get from passers-by who stop to take photos of the helicopter and saw daily. I’ve been called an Aerial Arborist, a Flying lumberjack, or a saw operator but Oddly enough very rarely do people associate my work with that of a pilot.

So what does the average day of a saw pilot look like? On my current project trimming the Vermonter Railroad, My day starts at 5 am. The early bird gets the worm and it’s no different in this line of work. Coffee and breakfast in the camper, looking over weather and any surprise TFRs. Lock up the camper and go preflight the 500. The helicopter is my daily driver and it comes back to my campground each night. Call the groundman and helicopter mechanic to ensure everybody is headed to the LZ. Wait for sunrise and Fire up the bird. Enjoy the million-dollar sunrise views on the peaceful flight to the worksite.

Coming into the LZ the saw will be set up from where I dropped it the evening previously. Unlike a regular long-line we can’t move the saw to the helicopter so I switch to a vertical reference landing and bring the skids down in the perfect position with the aircraft hook located directly above the saw attachment. This can be tricky initially and you’ll have to move backward and forwards a bit but after a while, you’ll land position perfect each and every time. Shut down the aircraft and perform a tailboard with the crew. The current project consists of trimming 220 miles of Railroad across the state of Vermont. I have 10-15 crew members, ranging from the railroad supervisor who is ahead of me all day. My production manager who monitors my cutting from the track and ensures we are cutting back far enough and progress is as expected. Behind me, the excavator operator pushes brush to the side, and behind him the brush and chipping crew. I have a groundman who looks after the saw maintenance and a helicopter mechanic who looks after the bird. Regardless of the project we discuss aircraft safety and saw safety. Possible emergencies and let everybody know what I expect from them in the event of an aircraft or saw malfunction. We also discuss railroad safety, our track limits, track hazards such as old railroad ties and old track thrown in the trees. We discuss overhead hazards such as communication lines, distribution lines, transmission lines. As the trains are still running communication is key and the railroad supervisor emphasizes his authority over when to stop cutting giving enough time for the crew to clear the tracks of brush and get the equipment off when a train needs to come by. Once everybody knows where the closest hospital is and to drink enough water and wear PPE it’s time to make some noise.

With the crew in position and the Helicopter RPM at 103%, I bring the 500 to a hover. Verify aircraft controllability and one last look at Temps and Pressures. Then I extend myself out the left door frame to my new home for the next hour. Slowly I increase the collective keep a little aft pressure on the aluminum pipes. When vertical over the saw cage I stop for a second then raise another inch of collective rotating the saw bolt in the cage bringing the saw up to the vertical position. I’m now 130 feet above the ground. Hold for a second and bring the wheel off the ground. Referencing my door TOT and torque gauges I climb vertically out of the LZ.

On my way to the cutting location, I turn my saw blades aft to prevent oscillations and turn my saw motor on to get ready to cut. When I get a green light from the production manager I engage the throttle, feel the slight vibration of the well-balanced blades and look as my light bar goes to the full operating sequence of 3750RPM. I drop in for a top pass keeping the railroad track off my left side and the saw blades facing toward the tree line. I pick references for cutting a straight line and keep my primary vision ahead of the saw. Looking for obstructions and at the tree types. Poplar, Poplar, Pine, hemlock keep the speed… birch, ash, maple slow down a little…. elm and oak slow way down. The name of the game is keeping the saw running and knowing what speed to cut into trees is key to avoiding saw damage. The saw is always in my peripheral vision to ensure everything is as planned. I work the saw forwards for a couple hundred yards then let it swing out gently ahead of me as I rotate my neck backward and switch my primary vision further aft and get ready for my aft pass. This is done at the same speed as the first pass just going backward. Extra attention needs to be given to Saw RPM as the blades are cutting upward and can throw debris up at the helicopter. Also, special attention to the tail rotor and main rotor blades as you get lower or are cutting next to an embankment. If the saw is not in the trees it’s not making money so I like to complete each side with forward and aft passes till complete and then move on to the other side rather than only trimming forward in left-hand patterns. On this project completing short spans and moving forward is key to keeping the excavator and brush crew working.

Groundman gives me 20-minute fuel checks and our fuel cycles last one hour. When the hour is complete I bring the saw back to the LZ for a fuel service of the saw and helicopter. On average we do 6-8 hours on the saw a day, but get as much as we feel comfortable completing. I like to keep my LZs as close as possible to the cutting area so as we progress along the tracks, the groundman finds a new LZ every couple of miles. This can be in farmers’ fields, people’s yards, outside businesses, or along the side of the road. Once he can find me a flat area of grass to put the saw so I don’t knock off the carbide blade tips and at least another 120 feet behind it to bring down the pipes and helicopter we can use it.

Flying the saw is like flying no other external load. I’ve flown most, and its demands on your back and neck are like no other with the time we spend truly vertically referencing. There are a number of emergencies that can occur with the Aerial Saw and each has its own response, from simply having your electrical connector getting unplugged to having your saw fully stuck. The key to the saw, like any other piece of working equipment is knowing everything about it.

When new hires come work at my company they become groundsmen regardless if they are pilots with 1500TT or pilots with 15,000 hours of vertical reference time. I teach them where every nut and bolt on the saw goes, how to change beams, how to replace shafts and belts. How to diagnose engine issues and replace parts or the whole motor if necessary. Once they master this I will check them out in the aircraft, EPs etc then check them out at long lining giving them expected standards and goals and moving the bar higher, the areas tighter, and the lifts and sets more difficult with each lesson. At this time I’ll have them ride along with me on short saw cycles. Then I will let them practice picking up and setting down the saw, and let them progress to trimming easier lines. Once they are comfortable and can make safe saw production which on average takes a year they will be set loose to run their own crews.

The saw days are long and after a couple delays throughout the day for trains it’s getting close to dark. I tell my production manager it’s time to shut it down for the day. I kick off the saw at the LZ and make the sunset trip back to the camper. Steak and Corn for dinner. Another great day trimming trees. Best job I’ve ever had and I sleep well at night.

Alan Stack from Cork Ireland, is a 10,000 hour precision and production long line pilot. When not looking down on external loads, he can be found at home in sunny Florida experimenting with additional aircraft category, boating and riding his motorcycle. 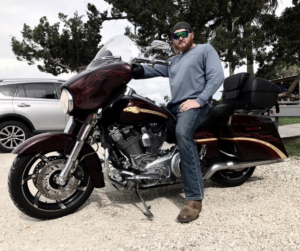