A Day In The Life…Chief Aircrewman! 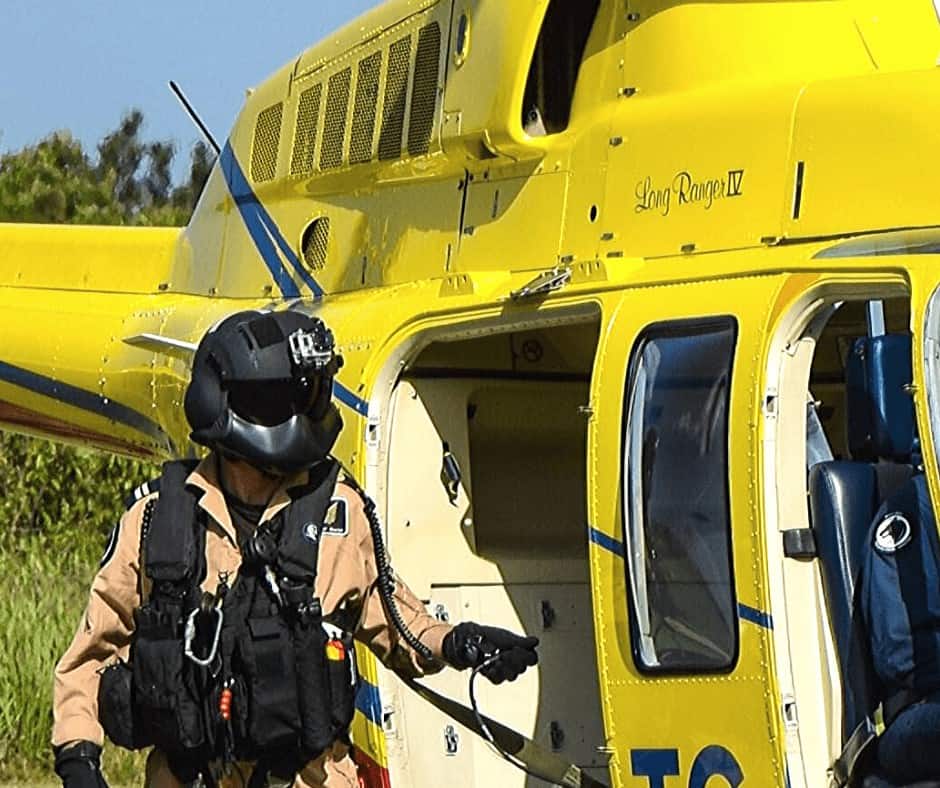 Chris ‘Razor’ Sharpe was the recipient of the HAI 2019 Salute to Excellence Safety award for his work within Guatemala promoting safety and standards training as both Chief Aircrewman and Instructor. In 2017 he formed his own company, Black Wolf Helicopters specializing in Special Operations Aviation and Training. He has recently written a book ‘HEMS Helicopter Essentials – Aircrew Survival Manual’. The following is one of those unique life-saving experiences, giving us a window into his “Day in the Life” as a Chief Aircrewman teaching both pilots and international flight paramedics and nurses how to be safer crewmembers.

As we all know, you strive to get a better rank, better pay, but with that comes more paperwork and less flying. Not happy!

Fortunately, today is a different day!

As a Non-Pilot but a Chief Aircrewman (NRCM), I have recently spent the past 6 years developing an international standard air ambulance service and in my spare time developing and teaching local Special Forces helicopter crews and commercial aviation pilots here in Guatemala. I am very fortunate that at least the company I work with (Helicopteros de Guatemala) as the HAI Platinum Safety Award winners in 2009, have a work ethic that many in this part of the world don’t have. High Standards.

As a rear crewman it is a very difficult job in somewhat ‘less than developed’ countries. It is a constant battle and very hard to educate new pilots or indeed remind old and bold ex-military pilots, ‘so you used to fly with a crew of three, what has changed?’. Fortunately for my generation, Pilots here are all formerly trained by the US military, but occasionally I still need to remind the Pilots what benefit a correctly trained and competent rear crew can do for them. The prime reason I set up Black Wolf Helicopters, was not only to teach rearcrews, but also teach pilots and base managers how they can effectively integrate them into day to day operations.

This week I am fortunate though, I am lead flight instructor for my own course! Although still not as much rotor time as I would like (I need an Admin Officer!).

This week, we are teaching my newly designed HEMS Helicopter Essentials Crewman course. Designed by myself from seeing such a horrendous shortfall in training, and solely designed to make the Doctors, Paramedics and Flight Nurses involved in HEMS/ HAA operations more confident and competent to support the Pilot and not just be a passenger. From understanding mission planning, aircraft systems and safety, to what the pilot is doing ‘up front’ (you guys don’t move very much once sat in the seat, you just look cool! So sometimes it’s very difficult for people to understand!)

After a week of ground school, underwater egress drills, STASS/HEEDS bottles, survival drills, checklist exams twice a day and practical work on the ramp learning to operate safely around a helicopter (before they even sit in one), they have finally planned and executed a simple flight mission. At the minute however, the students are, literally ‘in the field’.

What started as a simple planned VFR flight over the jungle, ended in (much to the pilots’ pleasure I may add!), a gut-twisting, multiple 360-degree flight ending in a simulated autoration. The students (current and future Flight Paramedics and Nurses) had received a normal Helicopter Air Ambulance call to attend a remote Point of Injury (POI) call.

A nice relaxed 1.5-hour transit to the scene of injury, taking photos of the countryside…

6 minutes in, the students are not happy as they fight against G-forces and vomit.

According to the Flypro, they believed the land survival phase starts tomorrow…They don’t have the script that we do…

Being myself a multiple crash/ ditching survivor, I one hundred percent practice the ‘dress to egress’ principle. Students who have not paid heed to this, or secretly planned for the training to be ‘tomorrow’ and fetch extra gear: will now suffer…

Especially as they are under the watchful eyes and critique of renowned jungle survival instructor Jimmy ‘Jungle’ McSparron.

So, as a rear crewman, the last day of this week course, culminates in a short-haul rescue of the ‘crash survivors.’ The planned recovery will take place at 0725 (if the students display emergency signals as taught),

For those that have never worked with ‘the constant annoying voices in the rear cabin’ this is now my Friday ‘day in the life’:

0445 leave house with flask of tea (I am British after all!), early, yes, but traffic is so horrendous if I wait 30 minutes a journey that will take me 45 minutes becomes a 4-hour trip…

0530, arrive at Helicopteros de Guatemala (HAI Platinum Safety award winners for 2009), normally this involves waking up both the main airport gate security and everyone else, but for some reason they are already awake today? Ops Manager is already here that’s why! Nothing to be alarmed by thankfully. HdG run a ‘tight ship’ and follow the book. So, although this course has been briefed extensively, we run a pre-flight brief, METAR, NOTAMS, HOGE (forecast) limits, emergency procedures – everything safety orientated is rebriefed.

The aircraft today is TG-HEC, a Bell Long Ranger L4, not in anyway what my previous career involved, but for Guatemala an absolutely awesome airframe. Due to ill-education, the term ‘rescue’ can involve either a SAR flight or a critical care interfacility transport of a patient requiring automatic ventilation, sedation, and all the nightmare drug calculations. So, as the Boy Scouts say, ‘be prepared’!!

The 206 is actually a very good airframe for this country, small enough to fit in some very small areas, easy to re-role on scene. Not perfect by any means, no hoist (there are none here at all), single-engine and no sliding door, but it works for what we need. There are other airframes available, most common is the AS 350 variant, but as every HEMS / Rescue flight must be paid individually, the extra cost puts it even more out of the availability of most people’s credit card. So, although not perfect by any means – it’s all we have available.

We adapt, write procedures and train with what we have, to make it as safe as we can as a crew. Welcome to the real 3rd world!

Today is relatively easy though…a short-haul rescue scenario, single strop with rescuer. Three trainee HSAR Techs as ‘dope on the rope’, 8 students who want a beer and the end of course BBQ! No pressure!

Now stood at the helicopters’ nose/ 11 o’clock position for start, even though HdG have designated ramp staff, I do and teach ‘ every time, all the time’. The PIC indicates to start engines, ‘Libre’ (Spanish for clear), a visual check left and right and the hand signal to start 1, and engage rotors. Once up to take-off power and the nod from the Pilot, I do my normal panel and rotor head check, right side first, then passing the nose, continue down the left side of the aircraft, The ramp guys are following and do their own checks, but I don’t mind, they are not doubting me, just doing their respective job, there is no ‘I’ in Team…

Connect ICS wandering lead, crew restraint harness, and after our preflight challenge/response checklist, report ‘Checklist complete, secure in the back, clear for flight’. As we are doing a rescue scenario today it is easier for me to hang out and check the left side of the aircraft (Single Pilot, Right seat) – clear left and above, clear for forward flight.

The Pilot is the Chief Pilot (Capt. Edras Barrera), so no pressure on me at all… Between us both we have 34,000 hours so despite some language issues, through extensive ground and air training, we now operate seamlessly.

Into the hover, and transition. Finally! Back to where we all love and want to be! Watching the fixed wings sat in an orderly queue for the runway…bless them.

5 minutes later, we are now entering our mission area for the day, the HSAR Techs are already on the ground, out of sight having maintained supervision throughout the night, and now preparing to do what they also love to do best.

A short distance away from the students who are thankfully signaling their ‘downed bird’ with issued blue marker panels (orange is the worst color ever!) and a pyramid rescue fire as taught. They are not happy after only 18 hours in the jungle.

We land on, rotors running at idle and after receiving ‘clear out, right’ from the PIC, I disconnect and hop out to rig the Short Haul Line ready for the rescue scenario. Following our checklist, which we challenge and respond to each stage for safety, I then coil the line in the rear cabin, secure it and load the SAR Tech. For risk assessment (even though this is a training scenario and we know exactly where we are going), train as you fight and all of those mantras we learn in the military and on social media, we fly a short overhand right circuit (as we are all looking out of the right door) before returning and rigging for short-haul. The SAR Tech now holds the short-haul rope in his left hand. We transition into the hover, T’s & P’s, no warning lights, HIGE check is good, thumbs up and the SAR Tech connects.

For me, now is all about supporting the Pilot.

Main and Tail rotor, and Power available, my guy on the rope.

This is HUMAN external cargo (HEC), according to the definition ‘cargo’, yes, but still, a real person who understands that if it goes bad and we need to save the aircraft, the 3 security measures in place will be cut… A topic that I ensure everyone understands in the mandatory ground schools we do immediately before.

The scenario then flows into a blur of jungle canopy extractions, a constant ‘patter’ to the Pilot. Finally, all students are safely recovered, the helicopter lands on and any ‘hot debrief’ notes given to me by the pilot for immediate briefing. As is a training scenario, today I don’t fly back but debrief the scenario to the entire group. As part of the ‘Just culture’, this includes my SAR Techs and the students who are still learning. If it is a safety issue, everyone needs to know, who knows, in a few years’ time, some of the students may be on active operations themselves.

The SAR Techs now take over and return to the training site to ensure it is cleaned of all human traces. In the UK military, we used to say ‘rank hath its privileges’, not convinced at the minute!

I sit, dry throat, dehydrated (it is 34 degrees centigrade after all), and think of all the mandatory paperwork that now needs completing…. plus, formal debriefs with students, pilots and SAR Techs alike utilizing the extensive GoPro footage. Micro analyze everything.

All before tomorrow morning when we move into a helicopter rappel training 6 monthly refresher, precision long line tests for the aircrews first, then the HSAR Techs.

Chris has recently authored his book ‘HEMS Helicopter Essentials – Aircrew Survival Manual’, that takes the individual from the crew room, to the crash site and back again, but is focused on mitigating the risk in the first place before traditional survival skills are needed.